On June 28th and 29th the True North Brass was in residence at the National Youth Orchestra in London Ontario. This week is their chamber music week for brass. The orchestra only works on chamber music for a 2 week period ( brass players for one week only) before the full orchestra assembles to play orchestral repertoire. Brilliant! True North worked with the brass players in two 3 hour workshops and gave a 40 min. recital for the whole orchestra and faculty. We were also asked to lead a “round table” discussion with orchestra members. Our focus was on Goal Setting! 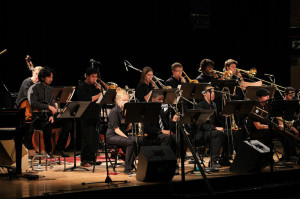 I led the discussion by having each True North Brass member give their summary of how they stayed vibrantly enthusiastic about being musicians and pursuing a life in music over 35 or 40 years. That truly is an accomplishment. These musicians: Raymond Tizzard, Manon LaFrance, Shawn Spicer, Scott Irvine and myself ( Al Kay was busy commuting back in Toronto to play the Jazz Festival that night, in true Freelancer mode), are the epitome of great goal setters. They may not even have done it consciously at times, but as they opened their lives to the NYO students, it became clear that these musicians had a passion and understood exactly what made them happy and then pursued it with focus and consistency and support from others. Not to my surprise, the majority of NYO students were not goal setters. And yet, I showed them that at some point they decided they wanted to be in the NYO ( Idea) and then practised for a few months on the audition material ( PATH) and then took the audition and waited for the results ( RESULT) and then made the common mistake of not comparing their idea with their result and assessing their satisfaction level ( celebration and satisfaction levels omitted)- no celebration and no conscious awareness of their personal satisfaction with having succeeded at their goal. Just a point of information: I auditioned 7 times for the NYO before I got in. I started in Grade 9 and I remember saying to my dad, “ I’m never going to get in to the NY at this age” and he responded with “ you’ll never get in if you don’t audition!” Point taken. So, he drove me into Winnipeg and I forgot my clothes for the audition in Dauphin and ended up , to my horror as a teenager, playing my first NYO audition in my step-mother’s mothers’ clothes. I didn’t get nervous, I was so focused on how I must have looked. I also didn’t get in, but the ice was broken and I just kept auditioning until I did get in. For me the IDEA was like a seed planted in my brain and 7 years later ( the Path) I saw a RESULT. You only fail if you quit. I am the only member of True North Brass that auditioned for and got into the NYO. Of course, the other TNB members did not have my dad. Goal setting can take many forms but the essentials are the same. You set out to create a specific result. But you have to decide first what that goal is. I did get the question at NYO “What if you don’t have any goals? What if you don’t know what you want?” I get these questions frequently. My response is “that is a goal”. Not having goals is a goal and you can imagine what the result will be. We do know what we want. Every day we make decisions about what we do and don’t like. It is just that we don’t pay attention to this and assume that we know way more about what we don’t like rather than what we do like. Every day you make decisions about small goals: Chocolate or vanilla ice cream, what you wear each day, what you eat, who you associate with, how much you practice, what you practice, what thoughts go through your head, what words you use. By paying attention to these decisions you get a clearer and clearer picture of what you want. As I said in the FREE download on the site, you need to exercise the creative muscle. If you have never Goal Set, you can start with baby steps and then move to bigger goals. It is all the same process. Make sure you rate your satisfaction and celebrate your successes. This builds confidence and enthusiasm from inside you. It will be contagious to others. At our “round table” I asked everyone to create a goal for themselves of their experience at the round table. We did this at the beginning of the lecture. In a room of about 120 people, there were 5 people who admitted to actually writing down a goal for the evening. Three of those people were on stage with me – the TNB members ( they are so used to doing this that they do it automatically). The two audience members wrote down “have more confidence” and “feel inspired”. We checked in with them at the end of the “round table” and rated their satisfaction with how they felt and both got 100% SATISFACTION! Another success came at the pub afterwards. A young brass player had gone to practice directly after the “round table” and came up to me in the bar after he finished and said “ I set a goal for my practice session and I had the best practice session ever!” We are in control of our experiences. If you decide ahead of time what you want out of an experience, you can then go back and rate the result and your satisfaction with it. You then can celebrate and learn. What you learn influences your next experience. Set another goal and pay attention to the results and satisfaction level. Both Manon and Ray wrote down the goal: Learn. Now you know why they are such stellar people and successful happy musicians. The sooner you start building your creative muscle, the sooner you will be strong and confident enough to create anything you want. People aren’t just born confident, they build it. Musicians aren’t just lucky to be successful, they build it. It takes passion and courage to pursue your goals. But rather than ask “Why are they able to be successful ?” Ask “Why not me too?”

Joan actually wrote this article a while ago and we figured TNB fans should know about it.  Joan’s coaching site here