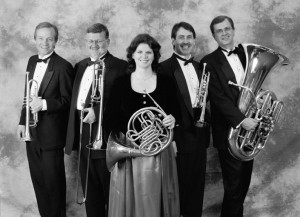 STUART LAUGHTON was principal trumpet of the Hamilton Philharmonic and an original member of Canadian Brass at age 19. Before graduating from Philadelphia’s Curtis Institute of Music he was appointed principal trumpet of La Scala, Milan by Claudio Abbado. In Canada, Laughton became a soloist and chamber musician, founded Opening Day Recordings (5 JUNO nominations from 18 releases), the roots/rock band Porkbelly Futures and The Forest Festival (theforestfestival.com) in Haliburton Forest and Wildlife Reserve. He has premiered many Canadian works, including a trumpet concerto by R. Murray Schafer. Stuart is currently developing Radio Dial (radiodial.ca) in which he performs in many styles on many instruments. In 2015 Stuart was inducted into the Burlington Performing Arts Centre Hall of Fame.

AL KAY is busy as the Head of Brass at Humber College, a clinician, arranger, composer, and a virtuosic jazz and classical trombone soloist. He has performed with leading artists and entertainers such as Ella Fitzgerald, Rob McConnell, Diana Krall, Tony Bennet, and Frank
Sinatra. Al has recorded hundreds of jingles, albums, film and tv soundtracks, and performs regularly around Toronto with the bands of John MacLeod, Roberto Occhipinti, and Kirk MacDonald. He has also played for most of the musicals in Toronto for the past 40 years. Al’s
association with Yamaha has led him to Japan helping design the YSL697Z and 897Z trombones, and an Al Kay Artist mouthpiece.

RAYMOND TIZZARD is a founding member of True North Brass and for the past 30 years has been active in Canada’s classical music scene as a trumpet player and arts administrator. In addition to his duties with True North Brass, Ray is the Executive Director of The Hannaford Street Silver Band, Canada’s professional brass band, www.hssb.ca and is the Orchestra Personnel Manager and Music Administrator for the National Ballet of Canada. Last year his Alma Mater, Western University in London Ontario inducted Ray to the Faculty of Music’s Wall of Fame.

SCOTT IRVINE grew up in Toronto and studied tuba with Charles Daellenbach at the University of Toronto. His desire to branch out musically led him to composition lessons with Samuel Dolin at the Royal Conservatory of Music. The result was a parallel career as a composer and arranger. Many of Irvine’s compositions have been performed by concert bands and brass ensembles all over North America. He is a regular performer with many ensembles, from the Canadian Opera Company Orchestra to Sharon, Lois and Bram’s “Elephant Show”, to the Esprit Orchestra

BARTON WOOMERT, the former Associate Principal Trumpet with the Toronto Symphony Orchestra for thirty-two years, is an active free-lance musician who performs regularly with the True North Brass. In addition to his work as trumpet instructor at the Faculty of Music, University of Toronto, he also enjoys other teaching opportunities including the National Youth Orchestra of Canada. He also served as Brass Musician-in-Residence at Wilfrid Laurier University for one year. A native of Lancaster, Pennsylvania, he received his music degree from the Peabody Conservatory of Music at Johns Hopkins University in Baltimore, Maryland. Upon graduation, he traveled to South America where he played Principal Trumpet in the Orquesta Sinfonica Venezuela (National Orchestra of Venezuela) and in the Metropolitan Opera of Caracas. While there, he worked in the newly developing “El Sistema” music program for young Venezuelan musicians. He also served as soloist for four years with the United States Marine Band, “The President’s Own,” in Washington, D.C., and performed regularly at White House functions. Before moving to Toronto, he held the position of Principal Trumpet with the Hamilton Philharmonic Orchestra.