True North Brass has performed with quite a few orchestras over the years, so we were pleased when the North Bay Symphony asked us to join them for their March 1st 2014 concert. This past Fall,Scott and I reworked our orchestra arrangements a bit, and Jim McGrath re-orchestrated his lovely solo French Horn version of Fantasia on Two Newfoundland Songs to feature the full TNB. We sent the tweaked orchestra arrangements off to TNB founding member Ray Tizzard, who forwarded them up to North Bay sometime before Christmas. 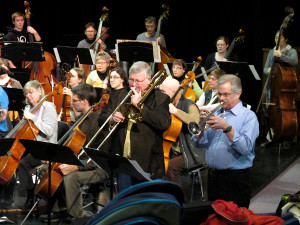 For this engagement we were glad to have on trumpet Bart Woomert, a long-time associate of TNB who had just retired from the Toronto Symphony, and Roslyn Black on French Horn who as a freelancer plays extra with the Canadian Opera, Toronto Symphony, and now TNB! Joan Watson our founding member horn player is taking a year off as Principal Horn at the Opera and playing in general to pursue other interests and taking a well-deserved break from her demanding playing schedule! Joan did come along with us and it was great to have her ears and eyes in the audience to fine tune things. Our original trumpeter (and harmonica player!) Stuart Laughton was with us too, (his lovely playing of Scott’s “Aubade” with the orchestra was one of the highlights of the concert).

We drove up to North Bay on the Friday for a rehearsal that night at a local school with the orchestra. TNB had rehearsed our parts for a few days prior, but we didn’t know what to expect from the orchestra. As everyone arrived, we started to recognize quite a few of the players, including Christian Robinson as the concertmaster who’d played our show a few years ago in Sudbury. We also met a very warm and friendly Maestro Tom Jones, who would be keeping the orchestra in sync with TNB. Within a few minutes rehearsing our first piece we realized that the Maestro knew our tempos well, and the orchestra was well-rehearsed. 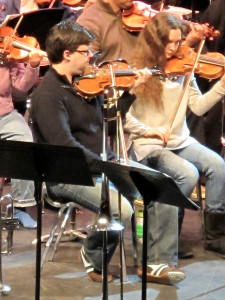 The next afternoon we had our second rehearsal in the lovely performance hall, and refined our pieces for the evening concert. The concert went very well, with lots of informative and often hilarious commentary between pieces by Scott and the rest of the group. It was a very warm and supportive audience all evening, and TNB and the orchestra responded with great musicianship and style! Many thanks to Maestro Thomas Jones, the North Bay Orchestra members, and board members for a very successful evening!