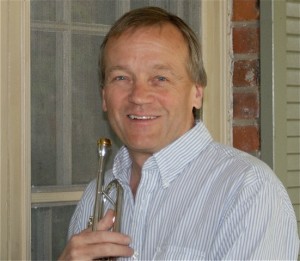 Stuart Laughton An original member of True North Brass, Stuart Laughton was delighted to receive an invitation to rejoin the group beginning in summer, 2013. He performed on True North’s first three albums, following which he joined Canadian Brass for three years and for five years was a multi-instrumentalist with Porkbelly Futures, the blues/roots group he founded.

Stuart was born in Canada and attended Philadelphia’s Curtis Institute of Music, during which time Claudio Abbado appointed him principal trumpet of Milan’s famed La Scala Opera. In Canada he has created a diverse career as an entrepreneur (founding Opening Day Recordings, which earned 5 JUNO nominations and a win from 18 releases), trumpet soloist (performing across Canada and in 26 states in the USA), arts administrator and board president (of R. Murray Schafer’s Patria Music/Theatre) and creator/artistic director of an Ontario summer music festival (theforestfestival.com). His latest initiative is “Stuart Laughton’s RADIO DIAL,” in which he sings, plays a dozen instruments, and fronts a band playing a wildly eclectic range of styles.

Richard Sandals The newest member of True North Brass, joining the group in the fall of 2007. Since 2001, he has played alongside Ray as principal trumpet of the National Ballet Orchestra. He is also co-principal cornet of the Hannaford Street Silver Band, and has been a frequent soloist with the band. Richard has performed extensively in and around Toronto with ensembles including the Canadian Opera Orchestra, the Hamilton Philharmonic Orchestra, the Kitchener-Waterloo Symphony Orchestra, and the Esprit Orchestra.

Born and raised in Guelph, Ontario, Richard holds degrees from the University of Western Ontario and Indiana University. Barton Woomert is the Brass Musician-in-Residence at Wilfrid Laurier University. He is the Associate Principal Trumpet with the Toronto Symphony Orchestra since 1982 where he has worked under many famous conductors including Peter Oundjian, Sir Andrew Davis, Gunther Herbig, Jukka-Pekka Saraste, Charles Dutoit, Helmut Rilling and Leonard Slatkin. His position with the orchestra provides him with the opportunity to perform with some of the world’s greatest soloists such as Lang Lang, James Ehnes, Joshua Bell, Yo-Yo- Ma, Emmanuel, Ax, Maureen Forrester, Itzhak Perlman, and Wynton Marsalis. As a teacher, he has served as trumpet instructor at the University of Toronto for more than 25 years, and he maintains a busy private studio. He also is an active studio and chamber musician who performs as a member of True North Brass. He enjoys a variety of free-lance performance opportunities, and when time permits, he pursues a special interest in trumpet and organ repertoire. During the summer, he serves on the music faculties of the Interprovincial Music Camp and the Lancaster County Music Camp of Elizabethtown College in Lancaster, Pennsylvania, and he is a trumpet mentor for the National Academy Orchestra and the Boris Brott Music Festival.

Prior to moving to Toronto, Barton was Principal Trumpet with the Hamilton Philharmonic and the National Orchestra of Venezuela. A native of Lancaster, Pennsylvania, he received his music degree from the Peabody Conservatory of Music, Johns Hopkins University in Baltimore, Maryland. Upon graduation from high school, he entered the United States Marine Band, the *President*s Own*, in Washington, D.C., and performed as soloist for four years in the White House.

Shawn Spicer Originally from Nova Scotia and now calls London Ontario home. He has degrees from McGill and Yale universities and is currently working towards a doctorate at the University of Toronto. Shawn has worked in musical organizations across much of Canada from Symphony Nova Scotia to the Calgary based Foothills Brass Quintet. In 1999 Shawn was appointed principal trumpet of Orchestra London Canada. Shawn also performs regularly as a musician at the Stratford Shakespearian Festival. As a soloist over the last few years Shawn has played a wide variety of concertos and solo works by Haydn, Hetu, Ligeti, Bennett and Bach.
Shawn also loves to play baroque and renaissance music on original instruments like the baroque trumpet and cornetto. Performances on these instruments have taken him as far away as Japan and Brazil. He has played with Taffelmusik, Studio de Musique Ancienne de Montreal, the Toronto Consort, the Toronto Masque Theatre and the Sante Fe Early Music Society.
Shawn is also active as an educator. He was trumpet instructor at the Canadian Forces School of Music in Borden Ontario from 1991-1998 and since 2003 Shawn has taught trumpet at the University of Western Ontario. Since August 2007 and 2009, Manon has been a member of the “Trumpet Dream Team” of the world-renowned Canadian Brass. She is the first woman and the first musician from the province of Quebec to be part of the quintet. With them she has played many concerts in Canada, the United States and Mexico. Manon has also recorded three CDs with the quintet: “Christmas Tradition”, “Manhattan Music” (Canadian Brass and the Eastman Wind Ensemble), and “Echo, Glory of Gabrieli” which are available on the www.canbrass.com and www.arkivmusic.com websites.

Manon was invited to be first trumpet of the National Ballet Orchestra of Canada (Toronto) in 1999-2001, and was a member of the trumpet section of the Montreal Symphony Orchestra during the 1994-1995 season.

Manon has also taken part in many tours in the United States, Europe and Japan with the Canadian Brass, the National Arts Center Orchestra, the Montreal Symphony Orchestra, Les Violons du Roy, and with various other orchestras and ensembles.

As a soloist, Manon recorded the Concerto for trumpet and string orchestra from the American composer James Cohn with the Latvian National Orchestra in Riga, Latvia, for XLNT Records, New York (CD-180010), in October 2001.

Manon has recorded many CDs (50 at last count), and has done numerous radio and television broadcasts and movie soundtracks.

Since 1997, she has been trumpet teacher and conductor of the brass choir and the trumpet ensemble at the Conservatoire de musique de Montreal. Every summer since 2001, Manon joins the brass teaching staff at the International Music Academy at the Domaine Forget in Charlevoix, Quebec, Canada.

Manon graduated from the Conservatoire de musique de Montreal in Jean-Louis Chatel’s class where she obtained a First Prize in trumpet in 1986 and a First Prize in chamber music in 1985. Thereafter, she continued her studies in New-York with Philip Smith and later perfected her playing with renowned teachers including Vincent Cichowicz and Arnold Jacobs.

Rob Weymouth is quickly making a name for himself. Rob is currently the second trumpet player in the orchestra of National Ballet of Canada. His other orchestral credentials include numerous performances with the Toronto Symphony Orchestra and the Winnipeg Symphony Orchestra as well as with the Toronto Bach Consort, and the National Academy Orchestra. Mr. Weymouth was also the Principal trumpet of the National Youth Orchestra of Canada for three years, during which he was a part of JUNO nominated recordings and performances of newly commissioned Canadian works. Currently completing his undergraduate studies at the Glenn Gould School of the Royal Conservatory of Music, Rob is also the Principal trumpet of the Royal Conservatory Orchestra.

Outside of the orchestral realm, Rob performs with the Hannaford Street Silver Band, and the True North Brass as well as various other groups around Toronto. As a soloist Mr. Weymouth has performed with ensembles including the Hannaford Street Silver Band, The Intrada Brass, True North Brass, and The Young Artists Performance Academy Orchestra at the Royal Conservatory. He has also had success in competitions winning both the Ontario Music Festival and the National Music Festival in the open brass categories during the summer of 2008. Hoping to begin new concept ensembles, Rob dabbles in composition and arranging and is looking forward to introducing brass music to new venues and new genres. Rob’s teachers include Andrew McCandless and Barton Woomert. Christine Passmore  performs regularly with the National Ballet of Canada Orchestra, the Canadian Opera Company, the Hamilton Philharmonic Orchestra and the Hannaford Street Silver Band. She was featured in the 2009 production of Sondheim’s Sunday in the Park with George (Shaw Festival, Niagara-on-the-Lake) and is currently playing My Fair Lady at The Shaw. Christine also performed in the Toronto productions of The Lord of the Rings, The Phantom of the Opera, and The Sound of Music. On natural horn she has been heard with groups including L’Orchestra Classica di Santa Croce, Batignano, Tuscany, Italy, the Philadelphia Classical Orchestra, the Chicago Opera Theater, the Smithsonian Chamber Players (Baltimore, MD), and the Aradia Ensemble (Toronto, ON). Christine holds degrees from the University of Western Ontario and Indiana University. Toronto-born Rachel Thomas has been playing trombone since the age of nine and at thirteen, studied and attended master classes with the renowned Canadian Brass. During high school, Rachel continued her studies and was a member of the Toronto Symphony Youth Orchestra for three years. She graduated from the Faculty of Music at the University of Toronto in 1988, studying with trombonist Gordon Sweeney and spending her summers either with the National Youth Orchestra of Canada or at the Banff Centre for the Arts. After graduation, Rachel joined the Great Lakes Brass Quintet, a highly acclaimed full-time touring ensemble. In 1992, she was awarded a Canada Council grant to spend a year studying with Joe Alessi in New York City. Shortly after her return home, Rachel joined the Kitchener-Waterloo Symphony as second trombone. During her tenure with the KW Symphony, Rachel has maintained a busy freelance career. She has been a regular extra with the Toronto Symphony Orchestra, joining them on two European Tours (1991 and 2000), two trips to Carnegie Hall and a Florida Tour in 1999. In addition, Rachel toured with the Royal Winnipeg Ballet Orchestra, and performed with Symphony Nova Scotia, Orchestra London and the Thunder Bay Symphony as principal trombone. 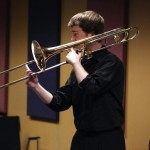 Nick Mahon is a Toronto-based trombonist.  After taking up the trombone at age 14, he enrolled at the University of Toronto, where he studied with Gordon Sweeney and Gordon Wolfe.  During his time at U of T, Nick spent 3 years with the Toronto Symphony Youth Orchestra under the baton of Alain Trudel.  In addition, he spent two summers with the Banff Festival Orchestra and one as a member of the National Orchestral Institute in College Park, MD.  He has performed with the Toronto Symphony Orchestra, Orchestra London, and the True North Brass. Sasha Johnson began his musical training at the age of sixteen, studying brass chamber music and tuba with Sam Pilafian at the Empire Brass Seminar of the Boston University Tanglewood Institute. He went on to study at the University of Toronto with both Mark Tetreault and Murray Crewe of the Toronto Symphony, with Toby Hanks at the Manhattan School of Music, and with Alain Cazes at the Conservatoire de Musique de Montreal. His additional private teachers have included Arnold Jacobs, Gene Pokorny, Mel Culbertson, Dennis Miller and Richard Erb.

In 1997 Sasha became the first Canadian tuba player to be accepted into the Von Karajan Academy of the Berlin Philharmonic. The purpose of this program is to train a small number of young professionals in the sound, style, traditions and standard of the Berlin Philharmonic Orchestra. Having begun his professional career in Berlin, Sasha went on to perform with many other European orchestras including the Berlin Symphony, the Berlin State Opera, the Radio Orchestra Berlin, the Orchestre Symphonique de Radio France, The Orchestre de Paris, the Ensemble Modern and the Orchestre Nationale de Bordeaux. He has performed in such music festivals and concert venues as the Lucerne Festival, the Festivale deAix en Provence, the Concertgebouw, the Konzerthaus Wien, the Theatre Champs-Elyse, the Schleswig-Holstein Festival, the Salzburg Festival and the BBC Proms, under such eminent conductors as Claudio Abbado, James Levine, Pierre Boulez, Kent Nagano, Essa-Pekka Salonen, Charles Dutoit, Kurt Masur and Seiji Ozawa.

Sasha returned to Canada in 2001 and has established himself as a prominent performer and pedagogue. In January 2009, Sasha was appointed principal tuba of the National Ballet of Canada Orchestra, and will be playing the 2009/2010 season with the Toronto Symphony.

In addition to his duties at McGill, Sasha was recently appointed as tuba instructor of the Glenn Gould School of the Royal Conservatory in Toronto.